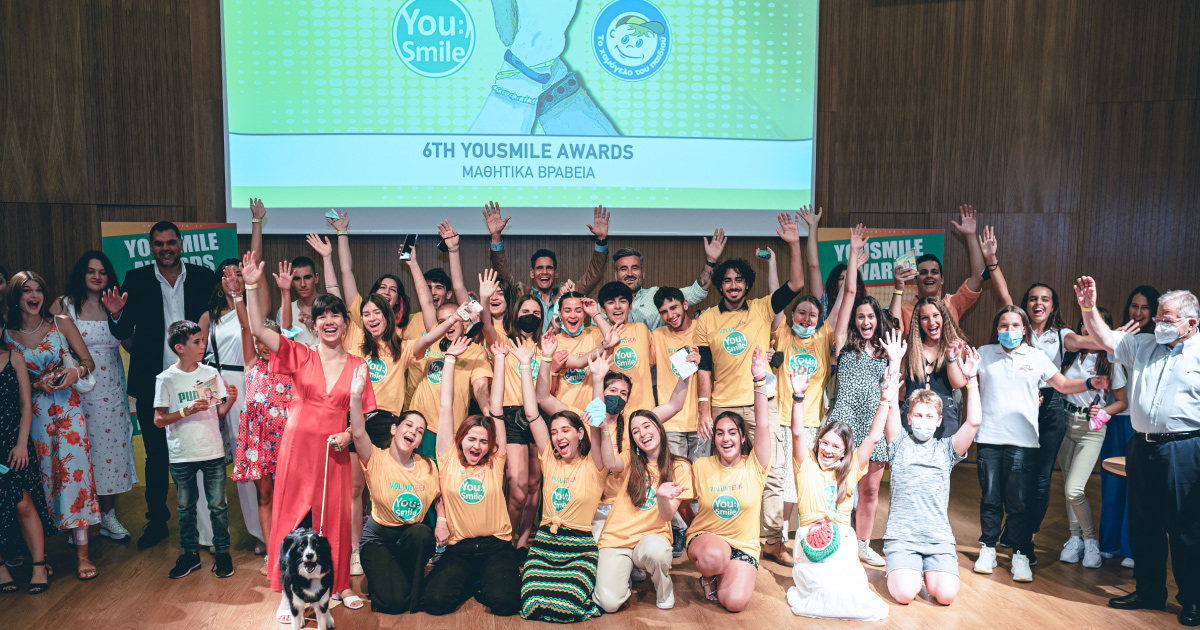 Children's smiles, laughter, pride and admiration flooded the “Miltiadis Evert” Amphitheater at the Technopolis of the Municipality of Athens on the afternoon of July 4, at the 6th YouSmile Awards organized by "The Smile of the Child" and the YouSmile Student Volunteer Network.

With the motto "You are never too young to change the world", the event, that throughout the years has turned into a tradition, presented by Dimitris Ougkarezos, was held again this year with great success and the sole purpose of highlighting student initiatives and actions that served as a source of inspiration for both children and adults. The YouSmile Awards are held every year with the approval and under the auspices of the Ministry of Education and Religious Affairs.

Just like every other year, the children impressed the audience with their ingenuity, creativity and humor, turning the event into a celebration of volunteerism and filling all those who attended, with pride and emotion. The event was attended by the Deputy Minister of Education Angelos Sirigos, as well as Member of Parliament (ND party) George Koumoutsakos.

And because the Student Volunteer Network of “The Smile” is made for Children by Children, the 8 winners were announced after a vote of the YouSmile volunteering students, while all the young participants received honorable mentions for their excellent initiatives.

It is worth noting that, always by observing the precautionary measures against the Covid-19 virus, the "Miltiadis Evert" Amphitheater was packed with participations exceeding 5.400 from 106 schools! In total of the 6 years of holding the YouSmile Awards, more than 35.100 students from 653 Primary and Secondary Education schools from all over Greece have participated, upgrading with their actions and inventions the Student Volunteering Network of “The Smile”, even more.

The President of Technopolis, Konstantinos Dedes, welcomed the attendees as a genuine host, declaring that he was happy to host the event: "I am very pleased that Technopolis is hosting "The Smile" tonight. In a time of toxicity, criticism and bad news, tonight we are here to reward the children. We are being taught from their bright paradigm, and driven towards the light and the good, and we reward these efforts. Without competition, children reward each other and we are here to celebrate their achievements."

At the beginning of the event, the Chairman of the Board of Directors of the Organization, Costas Yannopoulos, congratulated the students as well as their parents and teachers, expressing his joy that through the "Smile" the children continue to set the best example through action and self-expression: «Tonight I am a little more proud of our children. Because tonight the real officials are the children and their bright example to all of us. And my joy is so great, because after 27 whole years, our children are taking the example of the founder of "The Smile", little Andreas. Because he, like you, was bothered by injustice and all these bad things that happen around us, which he wanted to heal. And he succeeded and inspired you. You make us proud; you've made me a YouSmiler out of me!”

The Deputy Minister of Education, Angelos Syrigos, congratulated “The Smile of the Child” for organizing the Awards, referring to the importance of the Organization's important work: "What "The Smile of the Child" has conquered all these years is to legitimize itself as the horsefly of the system. What stings and bothers us and we can't get rid of it, we might want to get rid of it but we can't because it has been legitimized in our consciousness and it has many times showed us how fun and inspiration can create something new like the YouSmile Awards. I consider it very important that young people participate; unfortunately we are a society of gerontocracy. It is very important that children are given the opportunity to inspire and be inspired. Congratulations for all that you have been doing for us for so many years."

ND Member of Parliament Giorgos Koumoutsakos congratulated the children, encouraging them to maintain their imagination and creativity in adult life as well: "The Smile of a Child" is now "the smiles" of children, after 27 years of social contribution, an entire lifetime. Tonight some are the winners, but "The Smile" has taught us solidarity and vision. Because even the greatest journeys begin with a small step. Many thanks to "The Smile" for everything."

The young protagonists of the night were awarded by: Angelos Sirigos, Deputy Minister of Education, Costas Giannopoulos, Chairman of the Organization "The Smile of the Child", George Mavridis, Presenter, Vangelis Nakis, Instagrammer, Fanis Lambropoulos, Presenter, Comedian, Danae Pappas, Actor and of course Students-volunteers of YouSmile.

You can watch the entire event as it was broadcasted live, here.

Following the Awards and the special personal story of each Child, behind them:

Do children put out fires? In the Gouves village of Evia they do, and very effectively indeed! The students of the Elementary School helped in the huge effort to extinguish last year's fires in their home village, winning in addition to the Award, our admiration for their bravery.

For their initiative to prevent incidents of domestic violence, students from Kavala were awarded, after they conceived and implemented the idea of ​​"B-Safe", a bracelet of immediate alert in case of danger. By pressing an emergency button, an alert is automatically being sent to someone close to the person in danger, preventing thus the escalation of a potentially dangerous situation.

Students from Agios Dimitrios, Attica, taught us all a valuable lesson on the power of true friendship. Faced with the idea of ​​separating from their friend, an unaccompanied refugee from Guinea, the children stood by his side like a real family, stirring up a wave of support and initiating the procedures for his stay in the country, which they succeeded in doing!

What is a basketball player doing at the YouSmile Awards? When with his attitude he is an inspiration and an example to imitate, then he is being awarded! Dimitris Papanikolaou, after the diagnosis of himself with Asperger and his daughters’ on the autism spectrum, he pioneered at the creation of the UniqueAll educational program campaign, praising the diversity of each child, whilst helping them evolve and believe in themselves.

The talented swimmer of the 5th General High school of Heraklion Crete, did not give up, and in pandemic conditions she continued her intensive training in the swimming pool, as a result of which she excelled at the Pan-European Synchronized Swimming Championship in Malta, with the National Youth Team.

Are you waiting for the bus? Schoolgirls from Volos, made sure that this time was not wasted, creating and placing a lending library at the stop! Their classmates also contributed to the effort by enriching the collection of books, while citizens who either travel by bus or cross the point, can do the same.

A truly exemplary and conscientious little citizen of Thessaloniki, who has "put her glasses" all over her neighborhood and beyond, since she has made it her personal business to collect garbage from places that should not be located, but also to take care of stray animals. The young student of the 32nd General High School, remains an active citizen, writing with great success in electronic media about the value of volunteering but also the preservation of the natural Environment, managing to raise awareness among the general public.

A child who teaches us humanity and makes us believe again in the goodness of our world. Dimitra from Athens shares her food with our homeless fellow citizens, organizing meals for them, talking and enjoying their company! Dimitra wants us all to turn our gaze at them, not to feel sorry for them, but to make them feel less alone. Dimitra received her Award surprised and delighted, after her best friend Georgia submitted her application! It is worth noting, that the little student manages to offer the maximum to her community while at the same time competing with the Panathinaikos Team.

Schools that participated with their actions and initiatives in the 6th YouSmile Awards:

42. ALL DAY KINDERGARTEN OF KALATHOS

A big "Thank you" to our Sponsors:

"The Smile of the Chlid" 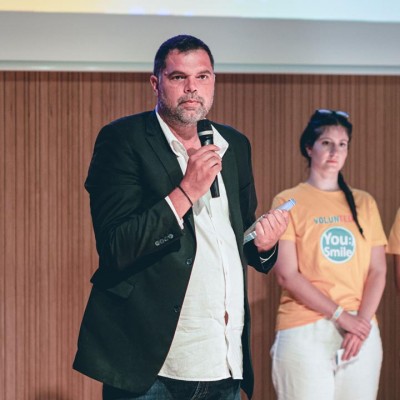 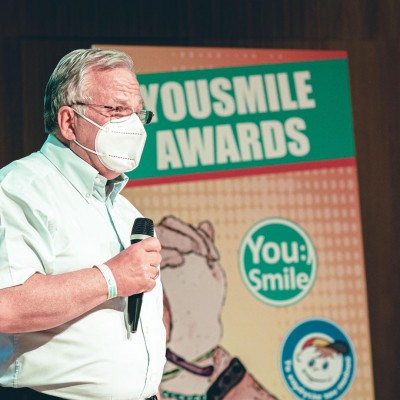 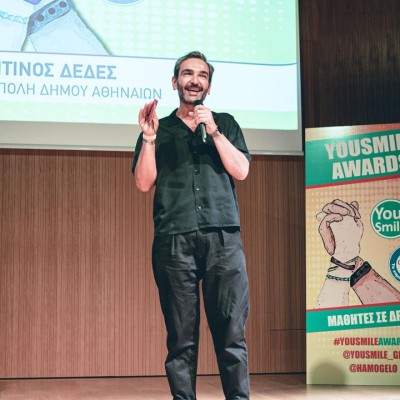 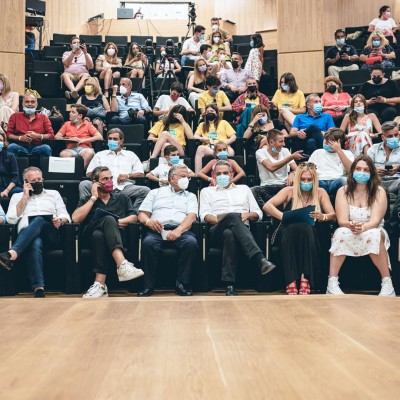 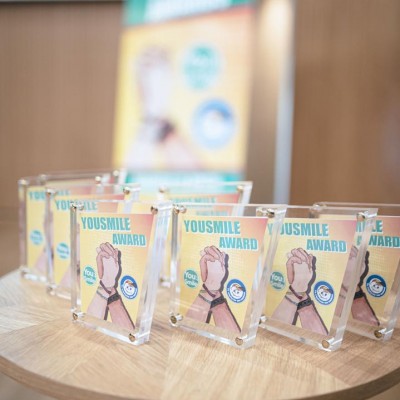 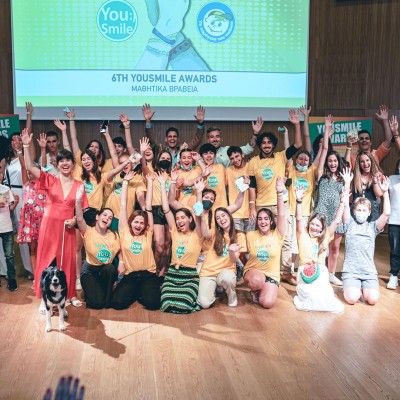 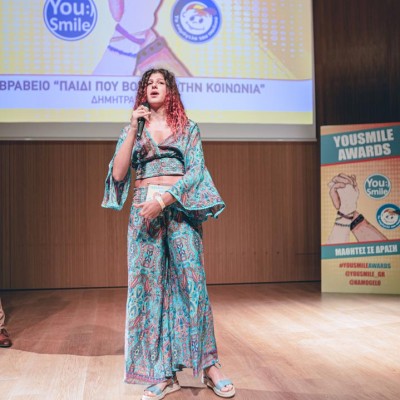 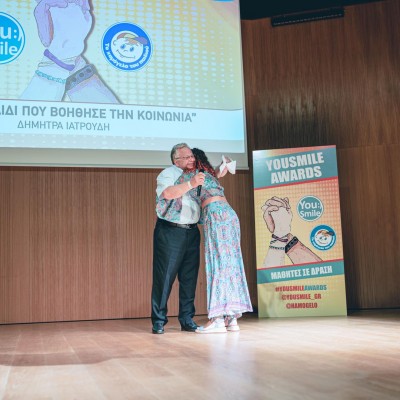 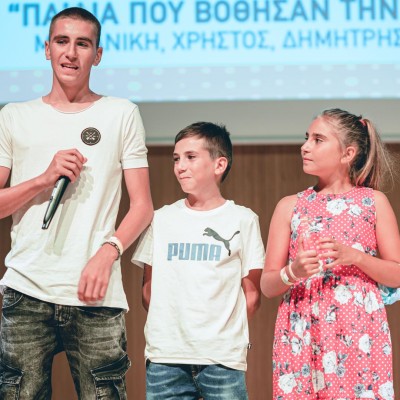 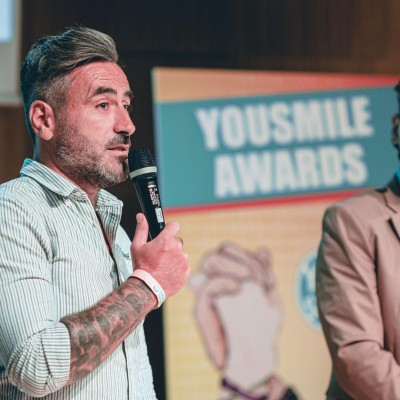 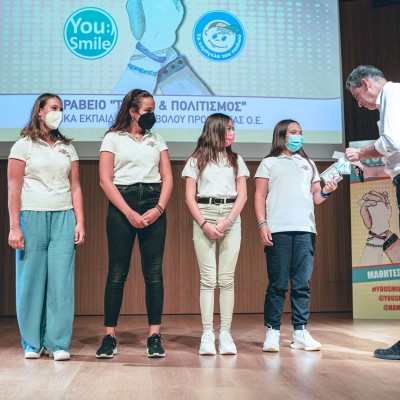 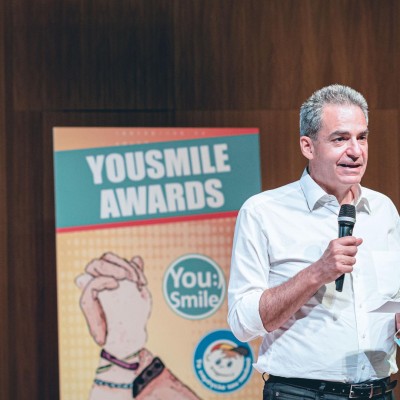 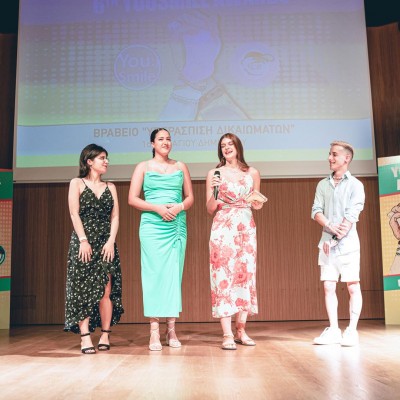 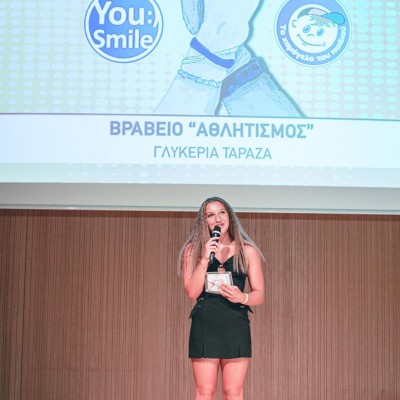 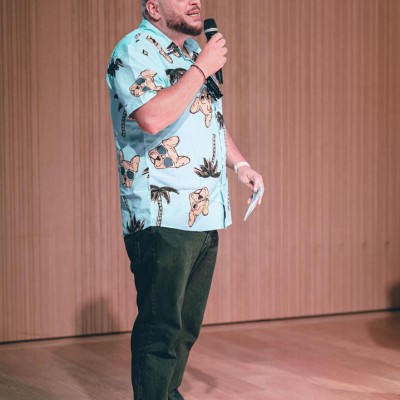 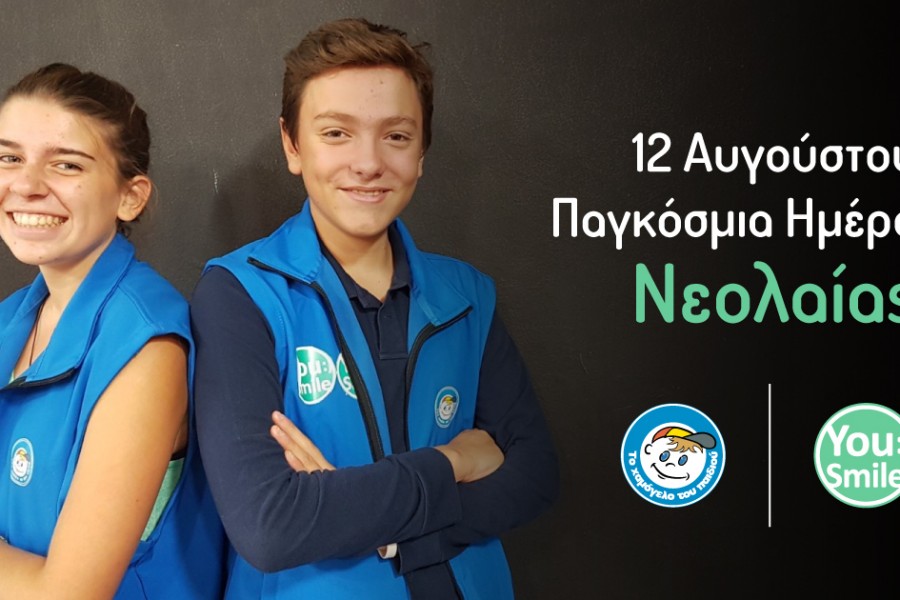 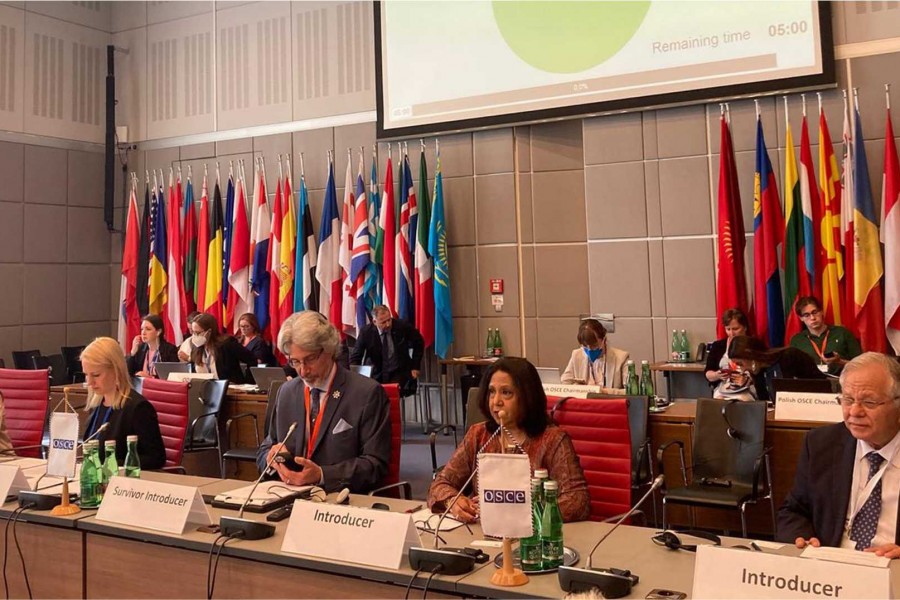 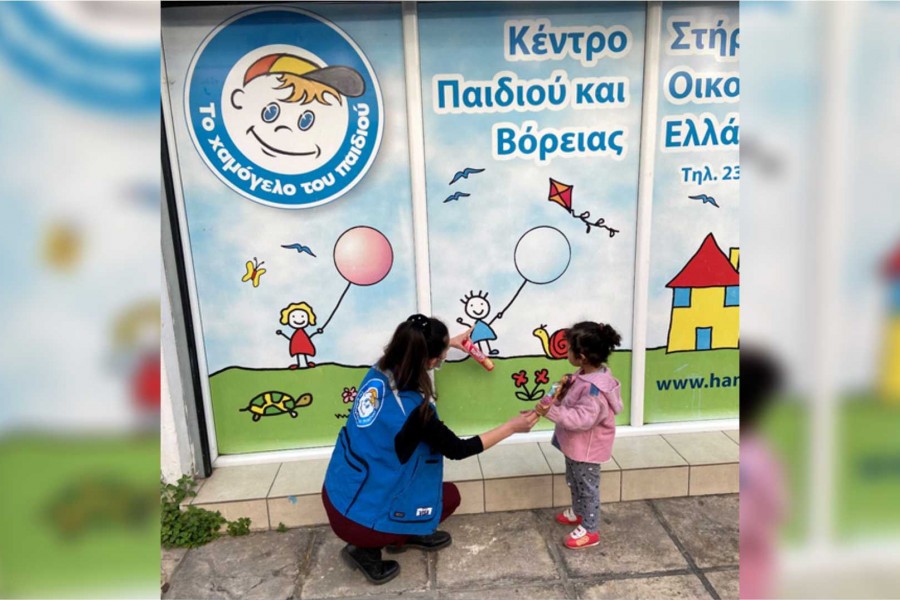